So, for all those years that Monster Hunter and its clones have been popular in Japan, that even series that have nothing to do with monster hunting have had games like that. Fairy Tail and Naruto come immidiately to mind, with Fairy Tail having three games like that. One Piece did about 4 games that are like Phantasy Star Online while their latest one on that series was very MonHun-light. Toriko is logical to have had three so far, it is MonHun with food…it was at least before the mangaka decided to make it pure crap. Yet Bleach never had one. You’d think even when Treasure, the guys behind the Bleach games for SEGA did a Monster Hunter game called Gaist Crusher, SEGA would have them capitalize on that. Nothing. Let’s fix that quite easily.

“But how, Bleach is about cool fights a la Saint Seiya.” 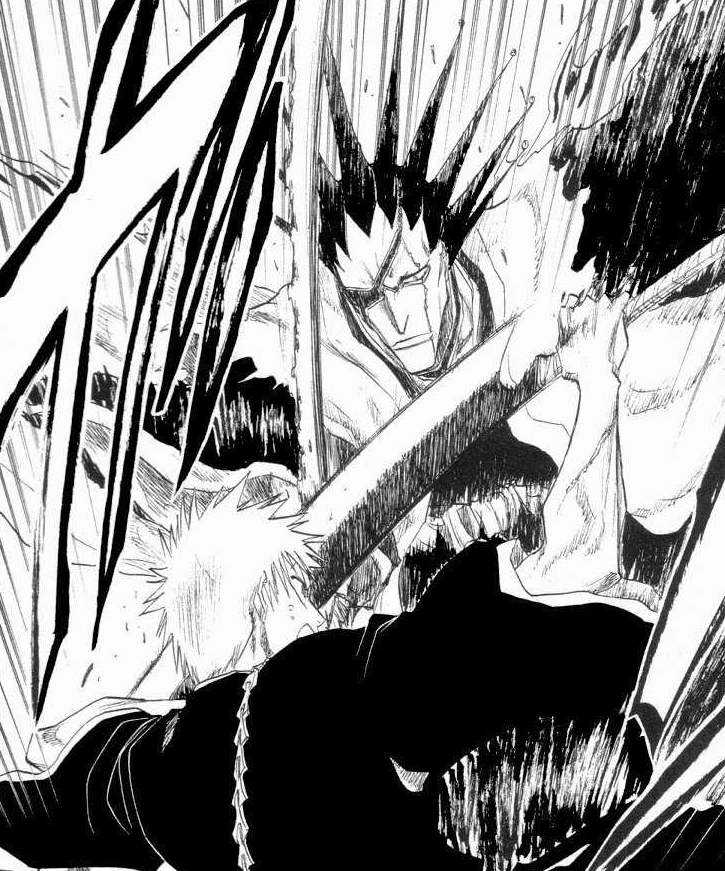 I know, I know. That’s what the story focuses on though. The story of Ichigo. That’s not your story, the player’s. Remember, the premise of Death Gods in Bleach is all about hunting Hollows and helping souls ascend. That right there can make for quite the interesting hunting premise. To those unfamiliar with Bleach, you have Death Gods that are either spirits or deceased people from all over the world and time, dressed like samurai and brandish swords and magic to defeat purify evil spirits born from the despair of the dead. Simple stuff and can make for an effective hunting game, having the bosses be the unique and dangerous spirits of evil people while the small peons being small time innocent people waiting for cleansing as it is usually the case in the show. Now, the materials gathered and gained from missions could be used to upgrade your clothes and most importantly upgrade your sword to advance in ranks and have it transform. That’s the gist of the game basically.

Since this is a hunting game, I’d rather it doesn’t do involve the main characters, at least that much in the game but rather incorporate them in a smart way. While Fairy Tail had to do that because the titular guild of the manga is…well, Fairy Tail, in Bleach, you can be a random recruit in a random team with random new people. I’d say, even have the game take place either after the end of the manga, before the manga starts or between the timeskip that happened. It would be best if the game invented a new squad / team / whatever, not numbered like the 13 squads and have them focus exclusively on being Horror hunters and while being structured in the same manner(Captain, Lieutenant, 3rd seat, etc) they don’t deal with the political matters and work in the shadows. That way they can do a standalone story that doesn’t collide or tries to fit in with the one the author writes, instead focusing on a collection of small character stories with an overarching theme and tie-in storyline like God Eater Burst did. The characters from the manga appear as cameos during downtime in the main quarters. And like in God Eater, the player avatar is “story mute” until the strongest and most emotional moment of the game. 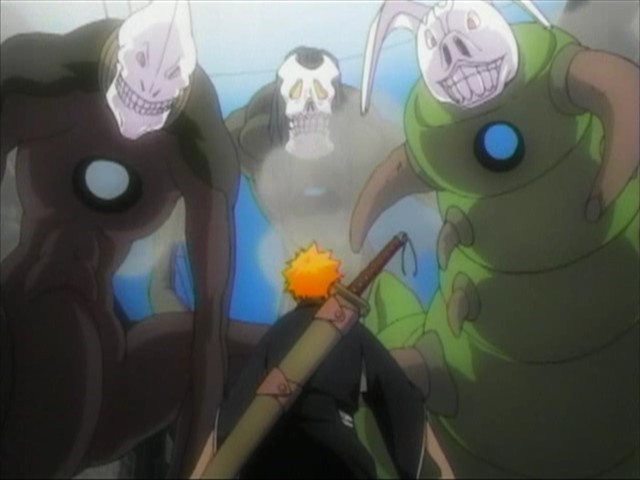 Let’s get technical and specific now. The way the game is meant to be played is by combining the best aspects of God Eater Burst, Gaist Crusher God and I’d even say, Lord of Apocalypse. First base it around the free and high-speed action of the first, with the ability to switch stances in battle, from the second take the ability to freely change forms and movesets while in battle along with a great upgrading system that affects the entire set of “armour-weapon-forms” but with the skill progressing of God Eater and from Lord of Apocalypse, the proficiency system(not the leveling system), the Battle Arts and perhaps the giant boss QTEs. Yeah, that sounds like an insane clusterfuck, especially because of the last one. Putting it simply, using God Eater Burst as the base would be the best for starters, so that every big Hollow is a “boss” character in themselves.

It should be pointed out that the arsenal of the Death Gods in Bleach consists of four basic practises and one of them involves a weapon : Zanjutsu, being swordmanship of all kinds and for later stages of the sword, even weapon mastery. Hakuda, being martial arts techniques ranging from basic street brawling to exotic Wu Xia dances. Hoho, their movement, in particular their high-speed movements and reflexes to avoid getting hit and gain distance offensively or evasively. Kido, the practise of spells using spiritual energy that have various degrees of power and uses. These four are pretty important for now and later on.

The way the player utilises them all in battle works mostly like God Eater Burst, the player starts with their sword drawn and the controls even are mostly the same. Unlike God Eater though, instead of switching to a gun, the player puts away the sword and adopts a martial arts stance for Hakuda fighting. While in Hakuda, the player’s moveset of course changes along with some slight changes in the movement but also gains the ability to use a sub stance that works like the God Ark’s Gun Form but instead is used for Kido spells the player selects and can carry up to 20 of any kind in battle. They use spirit, instead of Oracle Points but the theory is the same, each spell costs a certain amount of spirit, once the gauge is empty the player has to use melee attacks until to recharge it. The difference here being that spirit gauge slowly recharges on its own unless it’s emptied, in which case the player must slowly build it up again with melee attacks until it’s full again. Also, unlike God Eater, the player can perform kido even if there isn’t the necessary amount of Spirit left in the gauge, which results in the empty state mentioned earlier.

Finally, the player has the ability to evolve their sword twice in battle to change its appearance, uses, weapon type, properties, moveset while adding skills, unique attacks known as the battle arts and perhaps even changing the damage types and adding elements. The first release is called Shikai which is rather tame compared to the next step, the Bankai, where the sword unleashes the full power, granting buffs, even further changes in the weapon making the player overpowered but it has a time limit, like the Extreme Forms in Gaist Crusher God. Needless to say, the player must first build a meter to enter Shikai(which doesn’t have a time limit) and build it again to enter Bankai and upon getting out of the Bankai state, the players have to build the gauge again. It’s fairly simple, by attacking the enemy constantly, the meter fills but by taking damage, it decreases. Longer combos add more to the meter and fill it faster.

Finally each Shikai and each Bankai has battle arts, unique attacks that are executed by the press of a button, consuming stamina dependent on the art and have a variety of functions. The player can select the battle arts for the Shikai and Bankai in the main hub before a mission.

The way upgrades work is that the player starts with four different swords and four different robes, the standard uniform and three new variations for the game, a more ninja-like outfit, a samurai-like outfit preferably closer to this armour and an outfit like Kouga Saejima‘s with a shorter coat, each with different stats distribution. The four sword types are a standard Katana that has a balance between slashing and piercing attacks with a style that resembles kendo and iaijutsu, the most balanced sword in regards of length and speed. The second type is a ninjato that uses mainly piercing attacks mixed few slashing attack, with a focus on speed and unorthodox fighting utilised normal one handed grips and back handed, reverse grips, being the shortest in length but also the fastest sword. The third type is a fictional greatsword with a great focus on crushing attacks and very little slashing damage focusing on rotational slashing attacks that use strength and the weight of the sword to be fast along with heavy, slow and extremely damaging crushing attacks, big the longest and biggest but also the slowest sword of all. The last type is a very elongated xiphos in order to be gripped by both hands and focuses only on slashing attacks with regards to short, speedy combos, it features the second biggest length and is as fast as the katana but has less attacks because of it. All four of these have universal movesets, any characters in the game with these types of swords has the same moveset, like any other hunting game.

Each type of sword can evolve into four different ways though depending on the upgrade path the player chooses, to accomodate with the four types existing in Bleach : Melee types that focus purely on the physical abilities, Kido types that are designed around a specific ability, Elemental types that are focused on a single element and Dual Wielding types that are the most unique, not only splitting the sword in to weapons but also being able to use an ability(projectile mostly) as a bonus. Each Shikai has its own unique moveset, stat distribution, skills, Bankai and battle arts and there are four Shikai for each type of sword presented, one of each type for each type of sword. The Bankai enhances the abilities, skills, buffs of the Shikai and its moveset and battle arts at times or creates new ones(rarely). For the sake of convinience in the game, the Bankais will be condensed and somewhat normal sized instead of some insane ones like this, this or god forbid, this.

Apart from the ingredients gained in missions used for upgrading the robes and weapons, the mastery of the four disciplines is also necessary for effectively being able to use every bit of availiable resource but also for fully utilising and being able to access the Shikai and Bankai forms. While the upgraded sword may reach those forms and the player gains the status buffs etc, if certain conditions are not met(for example, a high enough proficiency at Kido for a Kido-based Shikai and Bankai) then the player won’t be able to access those forms in battle. These four disciplines are measured in levels, ranging from 1 to 10 at maximum proficiency and they not only unlock more techniques(for example, leveling Hoho unlocks Shunpo, leveling Hoho, Kido and Hakuda to an adequate degree unlocks Shunko etc), they also are used as base stats. Like Lord of Apocalypse, the players themselves got status that stack up with the status of the armours and weapons they make and equip but in this case, the status aren’t that important and just add a modest boost being more indicative of the mastery. While a lot of them will be lifted straight from the source material, some new techniques can be created for the game to add some gameplay depth.

And I’d say that’s what the basis should be. It’s pretty ambitious when you consider it, having 20 different movesets is quite the task, not counting the ones of the enemies and allies, not to mention implementing systems like that. But then again, without ambition action and action RPGs cannot move forward, even without some grand reinvention of the genre. Toukiden 2 is coming out soon and its ambition shows with the prospect of the world and interactions it shows by stepping it up from Monster Hunter and trying to achieve its own identity. It’s like this that Toukiden started and its how God Eater came to be…before it devolved. Point is, those games still can go further and I feel that this is yet another way to move forward.

Have a good one everybody, cheers. 🙂