This time I’ll talk about how to make TotHTB more…Tales-like. Now these additions I’m gonna list aren’t really to make the game better per se(it won’t make it worse) but it would give it a feeling that it belongs to the series and takes notes from its games. Those could also be used for a hypothetical sequel.

Now, one must understand that the Tales series is primarily an Action RPG, more than a fighting game, the role playing mechanics were far too thick to hide it, even back in the day where an accessory for making the artes into Capcom and SNk styled command inputs for combos existed. And like Final Fantasy, arguably the Tales series turn-based JRPG equivelant, they had staple mechanics that carried through each game. Some of those were skits, titles, cooking and A.I. managing. The last one is present in Twin Brave as well.

This is kind of baffling. Titles have been part of the Tales series since day 1. And it’s the easiest thing to implement in the game. Just add them accordingly with the actions taken by the player for a certain character. That’s easy. If a game like Lord of Apocalypse can do it, then so can Twin Brave. “Oh, you used Majinken 50 times, get a title with that certain name the character had in his game” that simple. The feeling of getting these “achievements” has been quite nice and a very hefty cosmetic.

However, as the games grew, the titles and their usages got more complicated. In Graces specifically, not only do titles give stat boosts and perhaps other bonuses but the catch was that you had to level up the title to unlock each of the bonuses it gave the players. That’s something great that can easily be used in Twin Brave. There’s not really much one has to do either way, just have the titles be stacked with only the negatives / nothing on it and with each level, a positive boost happens until the mastery.

Before moving on, the topic of stats should be adressed. I think the game would benefit from a very simplistic status screen with minimal input on the gameplay. What I mean by that, is that having just an HP, ACC, Attack, defense and speed stats, probably won’t hurt the game that much especially if done this way :

02.)Grade and the Grade shop 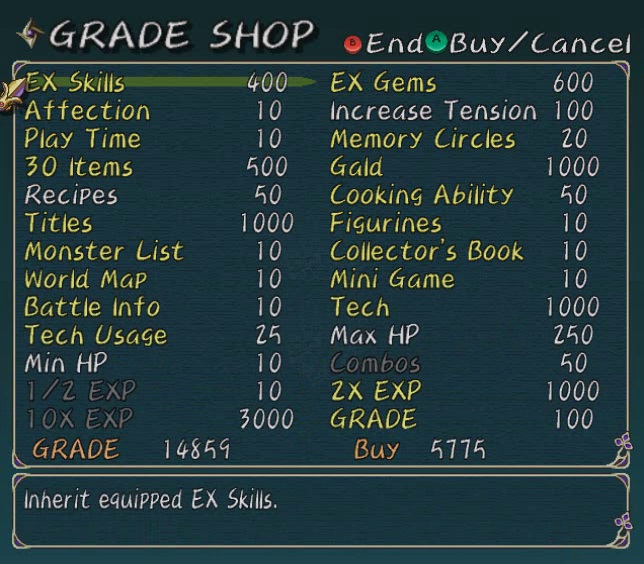 This is another easy one and frankly gives a bit more insight on the ranking system of the game, that already exists in the Tournament mode, if you paid attention. Depending on your performance, the HP you and your partner lost, you combo count, the time you took to kill the boss, the KO count and the overall tricks and different moves you pull off, you get rewarded with more chests to reflect the grade, with the highest being a circle of chest and in the center a golden chest with a lot of gald.

In Tales games, depending on the performance, one could get awarded or even lose grade by the end of a battle. That’s a very fascinating concept, actually detracting score from the player depending on the performance. The way I see it being implemented in the game is each time the stage is finished and the various EXP is awarded, there is an extra screen that calculates the highest combo, K.O. count, damage taken and time taken to finish the stage and awards accordingly the player, possibly displaying a rank to show the performance as well. A way to earn boatloads of Grade, without the need to farm, should be aquiring and mastering Titles and finishing modes for the first time, giving the player the original “achievement feeling” the Titles gave.

Now, Grade should be something universal like Gald and it should be a concern for the Grade shop. The Grade shop should be something that breaks the game, just like in previous titles, though the conditions for unlocking that should be high as to prevent a broken game fairly early. The things the Grade could offer are fairly standard, like double exp ablities for various stats, double gald enabled, better drops, various discounts, costumes, more accessory slots(up to 8 perhaps). The Grade Shop should also offer the option to make things more difficult, like half exp, half HP etc, if the player desires.

The unique thing they should do for Twin Brave should be that the Grade Shop’s higher priced goods are Arte Limit breaks, where the player can level up and more for double mastery, making the arte cost half of its original ACC cost and a more generous cancel window, allowing for devastating artes that cost more than 30 ACC(up to 60 ACC) in the game. Another thing would be buying “common Artes” that almost everyone can use with a similiar animation. Let’s be honest, almost everyone can use basic Majinken, Thrust, Sword Rain , Fireball, Lightning etc. No need to have it exclusive when the most basic of basics being readily available and at low cost. That way, a lot of the character’s artes can be their unique ougis or combined artes, like Cless’ Demon Sword Rain etc. The possibilites are way too many and the good thing is that advanced artes like Gou Majinken can and should have different animations between characters.

Cooking is extremely simple. Just have a special menu in the preparing screen before the battle that is the cooking menu, full of all of the series recipes. The way this acts is like in Monster Hunter, where before a fight you eat and aquire certain bonuses along with their duration, depending on how complex the dish is. For example, preparing and consuming Mabo Curry for example should give the player +3 hits for the entire battle.

Since Twin Brave doesn’t have materials or ingredients, the idea is that each character has a cooking level that starts differently but can be increased the more he / she cooks, allowing them to cook more complex and higher-level foods. The higher the level of the food, the more gald one must also spend to prepare them. Finally, the higher the cooking level, the less chances for failing the dish there are, resulting in 0 failures at max level. 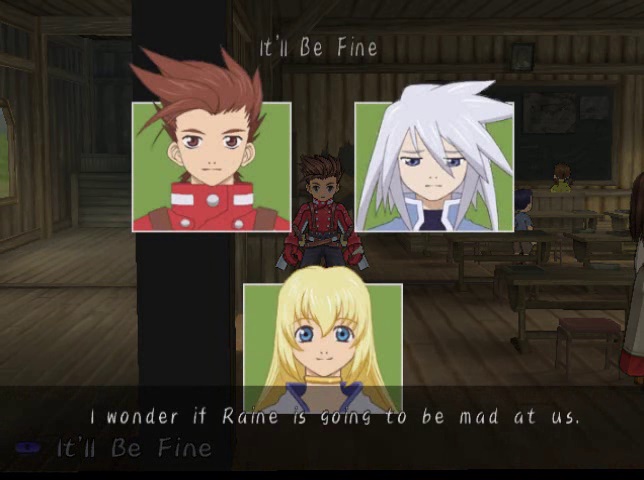 Skits are stupidly easy to implement and they don’t even need to be voiced. Just have a skit between two characters depending on their bond levels to show some funny and creative writting that isn’t tied to the story per se. And when some characters have max bonds between them(say, Lloyd, Cless, Stan and Yuri have all max bonds with each other) some of the more classic skits play out, perhaps even breaking the fourth wall like in Tales of Fandom. That should be it. And the player could just trigger them in the preparations menu before the battle.

And that’s about it, 4 additions, only one of them being somewhat complicating. Have a good guys.